On April 21, 2022, leaders from a variety of industries were among the Mississippi State alumni who were recognized by the Bagley College of Engineering for their accomplishments and commitment to the field of engineering at the 2022 Distinguished Engineering Recognition Banquet.

Nine alumni were selected as Distinguished Fellows while one alumnus was selected as the third recipient of the college’s Emerging Leader Award. 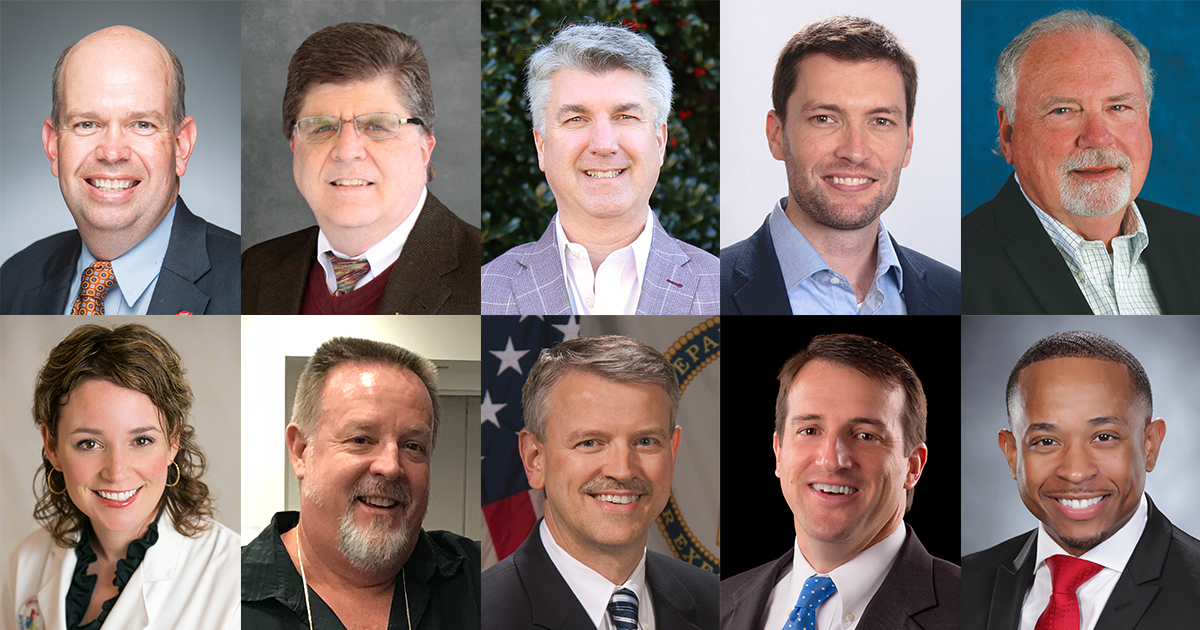 “We are proud to recognize a group of outstanding alumni for their hard work, service and contributions to their communities,” said Jason Keith, dean of the Bagley College of Engineering. “The success of our alumni is a testament to the quality of engineering education you receive from Mississippi State.”

Biological engineering alumnus Darvin J. Griffin, PhD was selected as this year’s recipient of the college’s Emerging Leader award. Griffin continued his education and career in clinical research within the medical device sector while earning his M.S. and Ph.D. at Cornell University. He is currently Director of Clinical Development at Allergan Aesthetics, an AbbVie Company. In his role, he is responsible for the development, implementation, and delivery of global clinical development strategies for next generational aesthetic devices.

The Emerging Leader award was first presented in 2019 and recognizes Bagley alumni who are under 40 but who have already made a tremendous impact in their profession or in the community.

The nine alumni selected as 2022 Distinguished Fellows include:

Faulkner has had a standout career in the field of chemical engineering, working for over 30 years at Dow Chemical. At Dow, he received multiple technology awards for advancements in the emulsions business. As a long-time plant leader, his plant teams consistently demonstrated breakthrough performance in safety, production capability and competitiveness.

Gaillet has built an outstanding aerospace career at Lockheed Martin over the last 35 years. As an Airframe Structural Design Engineer and Manager on several different aircraft programs, his work has resulted in a broad airframe design background that includes all phases associated with designing, supporting and managing production aircraft.

Hall has put his degree in mechanical engineering to good use with a proven track record in the energy industry, currently with Mas Energy. His over 20 years of experience in all aspects of energy project development has resulted in him consistently developing and delivering sound and sustainable projects and has resulted in a skill set that has brought tremendous value to his work.

Jones has both degrees in industrial engineering and computer science, uniquely qualifying him for his current role at International Paper. He is currently responsible for sustaining and improving end user experiences with technology. He is tackling the challenges of standing up a new organization and deploying new cloud-based solutions for end user productivity.

Kemp, with his degree in electrical engineering, has served as general manager of Starkville Utilities since 2010, only recently announcing his retirement after nearly 48 years of experience in his field. During his tenure, Starkville Utilities became the first utility in Mississippi to sign a TVA Green Invest agreement, which will bring the economical and environmental advantages of large-scale solar power to customers while building a more diverse energy portfolio to fuel Starkville’s growth.

Penny has used her degree in biological engineering to pursue a career in pediatric medicine. After her residency, she moved to Jackson, MS and joined the Children’s Medical Group, becoming a partner in 2013 and serving as president of the board from 2018 until 2021. She is also a fellow of the Academy of Pediatrics and a member of the Mississippi State Medical Association.

Phillips, after graduating with his degree in petroleum engineering, worked for Mobil Oil in well completions in the Gulf of Mexico and ended up working for times in Nigeria, Norway, Indonesia, and Scotland before moving to Saudi Arabia where he spent 30 years before his retirement.

Pittman has spent most of his almost 39-year-long career using his degrees in civil engineering in a variety of positions within the U.S. Army Corps of Engineers. In his current role as the Director of Research and Development, he is responsible for creating policy and performing strategic planning, direction, and oversight of research and development.

Sudduth is currently Chevron’s Corporate Affairs Manager in Mississippi, Belle Chasse, LA and Pasadena, TX. In this role, he manages a full range of public and government affairs activities. He has found that his degree in industrial engineering and the relationships built in college have been critical to collaborative efforts to influence policy. He noted that, “The Mississippi students of yesterday are the state leaders of today.”

The Distinguished Fellows program began in 1991 when 100 alumni were honored to celebrate the college’s 100th anniversary. Now, each spring, new alumni fellows are selected to recognize their accomplishments in the field of engineering as well as their service to the community.

You can learn more about the many impressive accomplishments of each of this year’s Distinguished Fellows and Emerging Leader in the awards banquet program.