The showcase, which occurs in the fall and spring semesters, featured twenty teams from the department’s Capstone Design I and Capstone Design II classes. Students in these courses used their knowledge and skills to incorporate appropriate engineering standards, all while fabricating designs, testing projects and demonstrating fully functional projects. During the showcase, each team had the opportunity to present their projects to those who attended. First through third places were chosen. 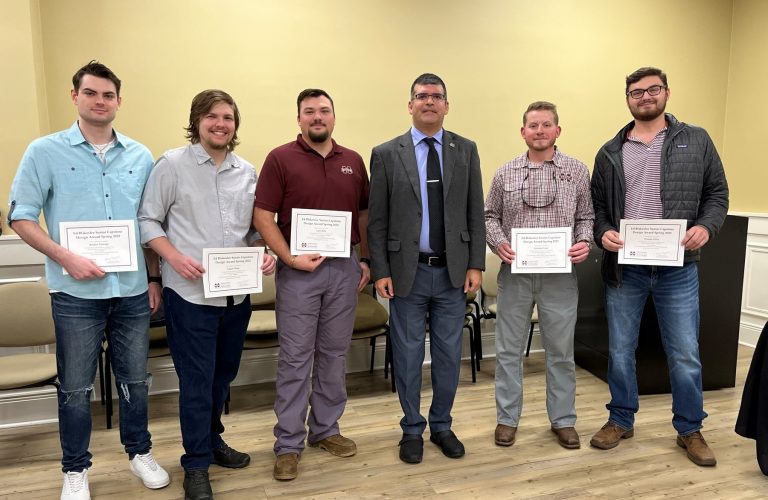 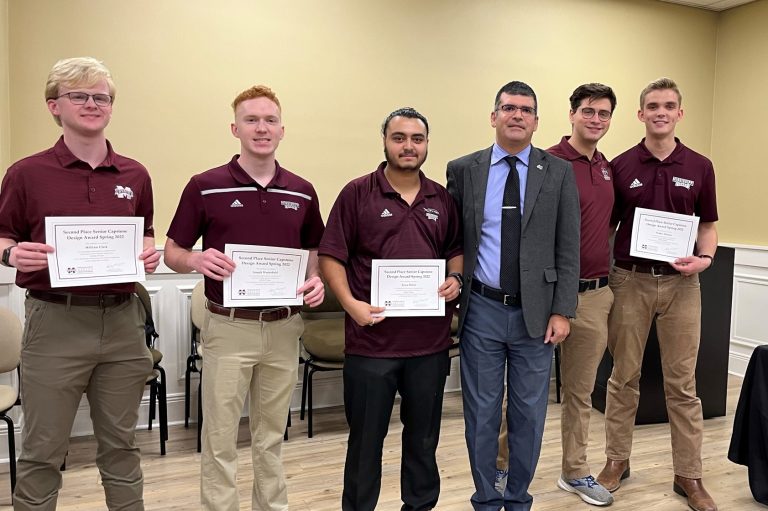 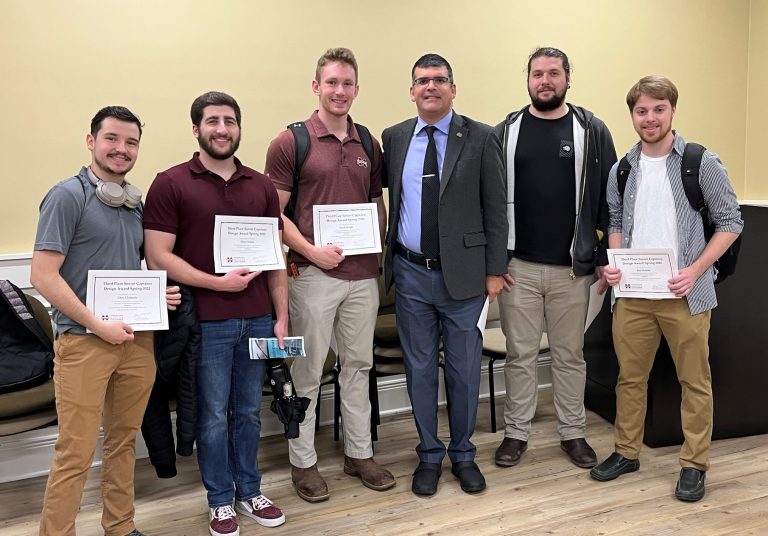 Package Safe
Team Members: John Diffey, Sofi Hastings, Luis Sanchez and Matthew To
Project Advisor: Ryan Green
Package Safe is a container designed to protect packages from threats such as theft and weather. The container detects when packages are delivered and removed, ensuring users always know the status of their deliveries. An alternative to a P.O. Box, Package Safe can be placed on a front porch or wherever the user desires.

Rain Away: Auto Wiper
Team Members: Austin Entremont, Tyler May, Gavin Shows, Jacob Clanton and Taylor Maples
Project Advisor: Umar Iqbal
Rain-Away is an intelligent system used to automatically control a vehicle’s windshield wipers during the presence of rain. Users can easily install Rain-Away on their cars, and it will detect rain and turn on the windshield wipers. The Rain-Away device engages the wipers at a slow, medium or fast speed depending on the volume of rainfall, all to adjust the wipers hands-free.

CAM: Color Accessibility Meter
Team Members: Cameron Bass, Xen Gaerlan, Joe Kennedy, Zach Scarbrough and Austin Wesley
Project Advisors: Umar Iqbal and Kendra Farrow
The CAM handheld is a small-form factor electronic colorimeter with an emphasis on accessibility. It allows for live color classification and color conversion support for the most common types of color blindness. Additionally, the handheld returns color formatted in Hexadecimal, RGB and CMYK color formats. With its long battery life, portable design and affordable manufacturing cost, the CAM handheld is the perfect solution for anyone with colorblindness. Alongside our handheld device, the team is creating a standalone application for IOS and Android devices. This application will have access to the full functionality of the handheld, plus a few perks of the new form factor. Because the app runs on a mobile platform, it takes advantage of the device’s native camera resolution. This means pinpoint color accuracy is no longer limited to expensive cameras. Additionally, the app will allow for live video color conversion.

Gear-EM Actuated Relay
Team Members: Paten Junkin, Cooper Hollomon, Adam Eades, Zack Stout and Noah Wright
Project Advisor: David Wallace
Geomagnetic Electromechanical Actuated Relay (GEAR) is a product that blends the trusted and traditional methods of line protection with the next generation of features. Blending this revolutionary design with the proper techniques to harden the grid against geomagnetic storms and the electromagnetic interference (EMI) generated from them. By adding a new suite of features to the classic electromechanical relay, GEAR provides a new standard for power system protection and increases system reliability to new industry standards.

Gatekeeper
Team Members: Avery Adams, Andrew Hunt, Ryan Smith, Joshua Hendrix and Blake Johnson
Project Advisor: David Wallace
Not only detection but protection, GateKeeper is a revolving door that locks when any conductive metal is detected. GateKeeper helps eliminate danger to people in and around security checkpoints. Security personnel can monitor the influx of people walking through the door, collect detected items through a small window and reset the system when an individual has been successfully screened.

Smart Target
Team Members: Cody Dye, Zack Smith, Jared McQuirter, Ruston Adams and JD McCraw
Project Advisor: Jane Moorhead
The Smart Target is a reset and scoring system used for long-distance rifle training. Smart Target introduces a user-controlled interactive element to long-range shooting. The shooter operates the target using nearby controls. These commands are processed and wirelessly communicated to the target. The target microprocessor activates a dc motor to raise or lower the target, allowing the shooter to hit the target. If there is a direct hit, a sensor reports that hit through a hit indicator located back at the marksman end.

Adventage - Smart Vent
Team Members: Nathaniel Possel, Charles Sailors, Chris Foreman, Anna Jackson and Haley Land
Project Advisor: Vuk Marojevic
The Adventage Smart Vent is an air vent designed to take information on the air passing through it and react accordingly. Adventage vents accomplish this by utilizing air quality and temperature sensors that send data to an application on the user’s device. The vent regulates temperature automatically by opening or closing its corresponding slats using a motor based on the data collected. 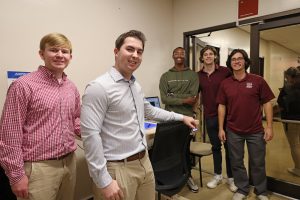 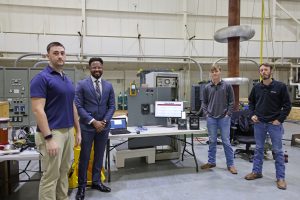 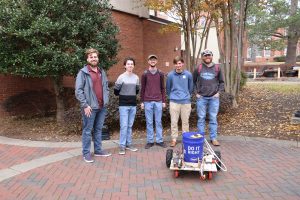 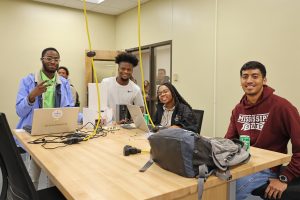 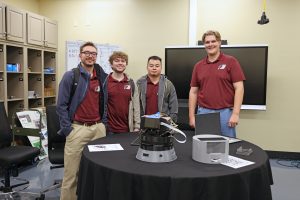 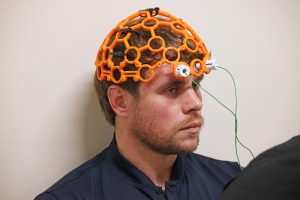 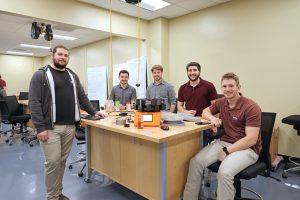 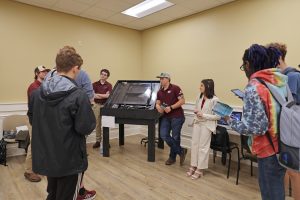 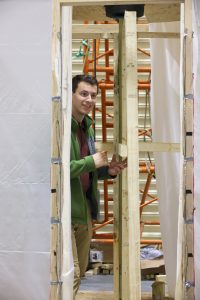 The Department of Electrical and Computer Engineering at Mississippi State University consists of 27 faculty members (including six endowed professors), seven professional staff, and over 700 undergraduate and graduate students, with approximately 100 being at the Ph.D. level. With a research expenditure of over $11.94M (AY21), the department houses the largest High Voltage Laboratory among North American universities.