NCEES honors Truax for service to engineering and surveying

The National Council of Examiners for Engineering and Surveying recently recognized Dennis Truax, the head of the civil and environmental engineering department in Mississippi State’s Bagley College of Engineering, with the NCEES Distinguished Service Award. 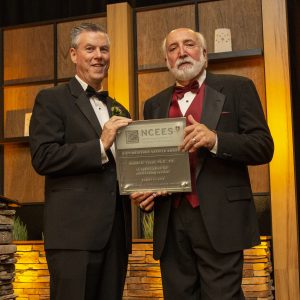 Truax received the award at the organization’s 97th annual meeting. It was presented in honor of his dedicated service to NCEES and the engineering and surveying professions.

“It is an honor to be recognized by NCEES in this way,” Truax said. “For everyone involved with the licensure board and this organization or in service to the profession, and for this organization to set me apart, lift me up as an example, is humbling and rewarding.“

According to the NCEES announcement:

Truax initially served as a member of the Mississippi Board of Licensure for Professional Engineers and Surveyors from 2005 to 2006 and has been serving an additional appointment since 2010. During this time, he has served as president, vice president, and secretary. Between board appointments, he was an emeritus member and continued to support the board as a consultant.

He made an especially important impact in 2005, when Hurricane Katrina devastated the Gulf Coast. He coordinated activities of the board and the Mississippi State University student chapter of the American Society of Civil Engineers to help address the needs of the state’s professional engineers. In addition to serving the Mississippi board, Truax has been committed to the work of NCEES. He has been a member of the Committee on Education since 2015. He was a member of the Advisory Committee on Council Activities from 2011 to 2015, serving as chair in 2014–15.

Truax has been actively involved in several professional societies. He is a fellow of ASCE and the National Society of Professional Engineers. He was a member of the ASCE Raise the Bar Task Committee, helping to consider future education needs for civil engineering, and he contributed to the ASCE Civil Engineering Body of Knowledge for the 21st Century. He has been the NSPE representative to the ABET Engineering Accreditation Commission since 2014.

Truax first came to MSU in 1976 to pursue a Master’s degree in Civil Engineering, and upon completion, went on to be an instructor. After completing his doctorate in the field in 1986, he was promoted to assistant professor. Nearly thirty years later in 2017, Truax was chosen to lead the department. He also holds the James T. White Chair.

Additionally, Truax has twice served on the American Society of Civil Engineers Board of Directors, and was responsible for launching the student chapter of MSU’s Engineers Without Borders.

The National Council of Examiners for Engineering and Surveying is a nonprofit organization made up of engineering and surveying licensing boards from all U.S. states, the District of Columbia, Guam, Puerto Rico, Northern Mariana Islands, and the U.S. Virgin Islands. Since its founding in 1920, NCEES has been committed to advancing licensure for engineers and surveyors in order to safeguard the health, safety, and welfare of the U.S. public. For more information, please visit ncees.org.