Getting from Starkville, Mississippi to San Diego, California isn’t all that difficult. Even with a layover in Atlanta, two flights will get you there in a single morning; however, when part of your “luggage” is a 200-pound concrete canoe, figuring out your travel plans becomes a little more complicated. 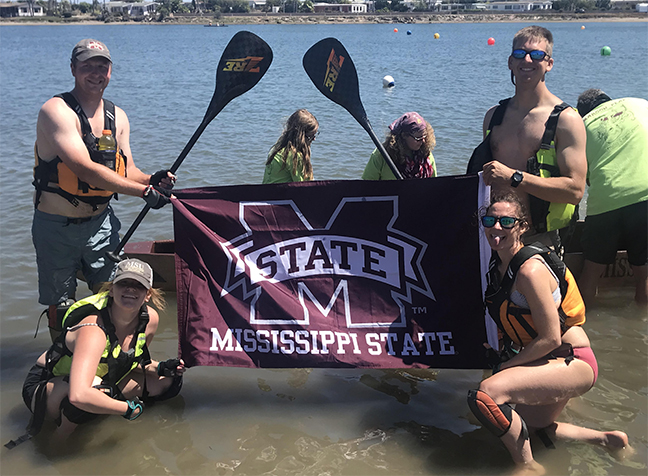 For the Mississippi State University Concrete Canoe team, the outrageous cost of shipping a canoe made out of concrete made driving it the obvious choice. When civil engineering majors Justin Gilliland, Morgan Cowles and Jennifer Deignan volunteered for the cross-country trek, the question of who would drive it had an easy answer.

After making sure the concrete canoe was safely loaded into a large trailer, the three Bagley College of Engineering students started the long journey from Starkville to San Diego for the American Society of Civil Engineers’ 31st annual National Concrete Canoe Competition.

The trip took 34 hours to complete and the team stopped every two or three hours for fuel and bathroom breaks, only stopping for the night at less than luxurious motels in Midland, Texas and Tucson, Arizona. Gilliland did most of the driving due to the fact he is well versed in pulling trailers, but had help from Cowles and Deignan.

“We had to be careful not to crack the canoe when we were driving,” Gilliland said, “but I was more scared of other drivers around us when we were pulling the trailer.”

The three teammates only encountered one potential hiccup during the drive to San Diego. They came up on an inspection zone near the Mexican border. While driving through the zone, Gilliland knew they would be asked what was in the trailer, so the trio attempted to assemble a brief explanation as to why they were hauling a concrete canoe.

Luckily the team wasn’t stopped and there were no other issues getting the canoe to the competition on time.

Although another team in the competition couldn’t say the same, which validated the Mississippi State team’s decision to drive their canoe.

The team from the University of North Carolina at Charlotte (UNCC) decided to ship their canoe via UPS, but their canoe got lost in transit and was nowhere to be found until a conversation between Gilliland and one of UNCC’s team members.

Gilliland suggested that the UNCC team tweet about the lost canoe and have other teams in the competition share it in attempt to catch the attention of UPS. After many retweets, UPS replied saying they would find the canoe and get it to the competition as soon as possible.

Although the UNCC canoe arrived at 5 a.m. the morning of race day, UNCC had their canoe in time to compete and the judges even let them make up the sections of the competition that they missed in the days prior to race day. 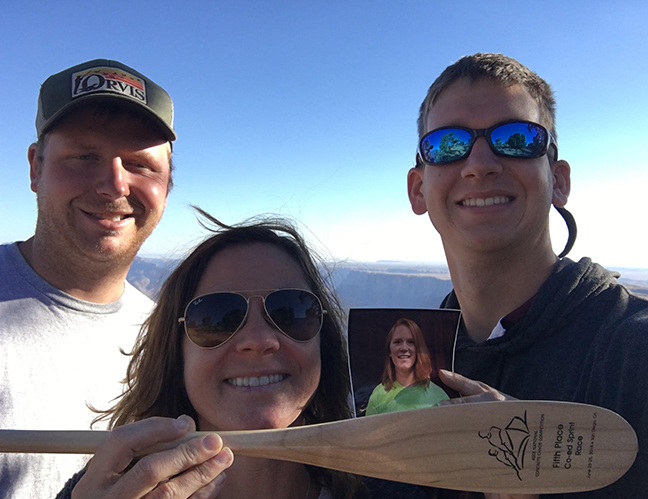 Gilliland, Deignan and Cowles made it to San Diego the evening before the competition started and joined up with their seven teammates who flew to the event. And the Mississippi State Concrete Canoe team went on to have their best ever showing at the national competition. The team finished 14th overall and was fifth in the co-ed sprint and sixth in the men’s sprint races.

“Jennifer, Morgan and I were excited that our co-ed race won fifth place, and we were the first team from Mississippi State to place at Nationals. It was definitely a big deal,” Gilliland said. “That sense of pride was awesome.”

While getting there is half the fun, as the old saying goes, the trip home was pretty enjoyable as well.

“The best part was the trip back,” Gilliland said. “We weren’t quite ready to leave San Diego, so we decided to check out the USS Midway Museum that someone recommend to us and Little Italy before we had to leave. On the trip home, we stopped at the Grand Canyon and that was awesome!”

As a member of the Marine Reserves, Gilliland wanted to stay close to home and go somewhere he could study civil engineering and receive in-state tuition. With the program Mississippi State offers for members of the military, Gilliland was able to attend after graduating from a community college in Tennessee.

Once starting at Mississippi State, a friend suggested he join the concrete canoe team. Now in his third year, he’s served as the chapter’s president as well as co-captain. Gilliland, who expects to graduate with a bachelor’s degree in civil engineering in December 2019, is working with this year’s team to prepare for next year’s regional competition, which will be held March 28-30. The team must win that competition first in order to advance to the national competition in June.

Should the team qualify for next year’s national event, which is scheduled to take place in Melbourne, Florida, at least they know they won’t have quite as far to drive.