Mississippi State University’s Bagley College of Engineering recently honored 10 alumni for their accomplishments and commitment to the field of engineering at the college’s 2019 Distinguished Fellows Awards Banquet.

Nine alumni were selected as Distinguished Fellows while one alumna was selected as the recipient of the college’s first-ever Emerging Leader Award. 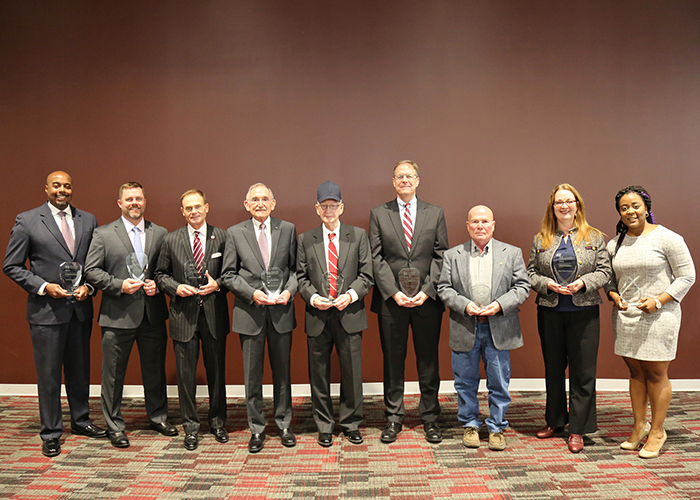 “Each of the alumni we honored strengthens Bagley’s reputation in their own unique way,” said Jason Keith, dean of the Bagley College of Engineering. “We are proud of their many accomplishments, which help prove that a Bagley education can help put you on the path to success.”

The college’s inaugural Emerging Leader Award was presented to electrical and computer engineering alumna Nashlie Seephus. Seephus is currently a software development manager with Amazon where she leads the Amazon/A9 visual search team. She joined Amazon after serving as the Chief Technology Officer for Partpic, a startup that was responsible for developing visual search technology. She also recently founded The Bean Path, a Jackson-based non-profit that provides technical advice and guidance to individuals and small businesses.

The newly created Emerging Leader Award recognizes Bagley alumni who are under 40 but who have already made a tremendous impact in their profession or in the community.

The nine alumni selected as 2019 Distinguished Fellows include:

Barland has had a standout career in the field of aerospace engineering, working for 35 years at Lockheed Martin. He has received 23 letters of commendation during his career and was selected as an Associate Fellow of the American Institute of Aeronautics and Astronautics. He earned the F-A-A Wright Brothers Master Pilot Award in 2012 and holds a U.S. patent for a fluid flow control device.

Hodges was a well-respected faculty member and administrator at Mississippi State. She spent more than 20 years as the department head of computer science and engineering before moving into administrative leadership positions at MSU. She served as interim Provost and recently retired as MSU’s executive associate vice president.

Meeler is the director of manufacturing for Raytheon Space and Airborne Systems. A certified Six Sigma black belt, he has won the Raytheon Corporate Excellence in Operations award and is a graduate of the prestigious Leadership Mississippi program. He has also been active in the community, serving as a volunteer with United Way’s Day of Caring.

Pritchard has been a registered professional engineer in both Mississippi and Alabama since 1986. In 1997, he founded Pritchard Engineering here in Starkville and, since then, the firm has consulted on more than 325 engineering projects on the Mississippi State campus alone. He is a member of the American Society of Civil Engineers and the National Society of Professional Engineers.

Redmond has nearly 20 years of experience in the field of medical device design and is currently the senior engineering program manager and technical fellow at Medtronic Spine. He holds eight patents with another seven pending and has published multiple peer-reviewed articles. He also holds two adjunct faculty positions in biomedical engineering at Carnegie Mellon University and the University of Memphis.

Reilly had an almost 40-year career with Texas Instruments where he retired as the vice president of the airborne electro-optics and new program development divisions. While there, he developed an advanced magnetometer for space exploration applications and was involved in the development of infrared equipment for a broad range of defense applications. After retiring, he served on the Rockport, Texas city council and as mayor pro-tem for six years.

Shurlds spent 20 years in the oil and gas industry before transitioning to a new career in corporate recruiting. He is currently the partner and vice president of OneSource Professional Search, which was selected as one of the top search firms in the country by Forbes Magazine in 2018. A member of the Society of Petroleum Engineers, he received that organization’s Service to Section award in 2016.

Summers founded SIS-Tech, a company specializing in process safety applications for industrial automation, in 1999 and has 37 patents on sensor and valve technology. Among her many accomplishments, she was named to the Process Automation Hall of Fame by Control magazine and was presented the Founders Award by the International Society of Automation. She has also been selected as a Fellow of three different industry organizations.

Thompson is currently the vice president of engineering for Goodnight Midstream, a private company specializing in water infrastructure. During his career in the oil and gas industry, he has served as a project engineer for multiple projects located around the world. He is a member of the Mechanical Engineering Advisory Board and served as the president of the MSU Houston Alumni Chapter for four years.

The Distinguished Fellows program began in 1991 when 100 alumni were honored to celebrate the college’s 100th anniversary. Now, each spring, new alumni fellows are selected to recognize their accomplishments in the field of engineering as well as their service to the community.